ERBAMAT, THE AUTOCHTHON VARIETY FROM FRANCIACORTA 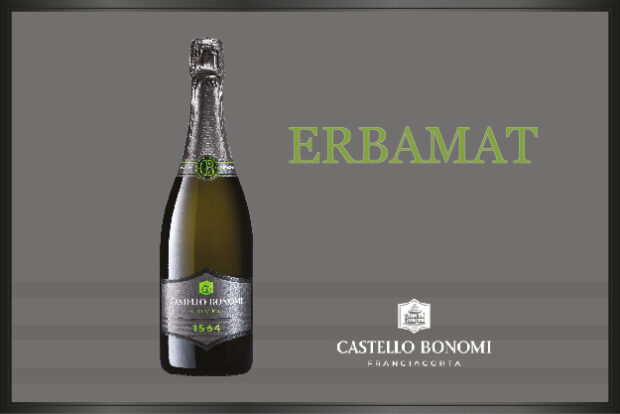 Castello Bonomi is one of the five companies that about ten years ago decided to support the greatest challenge undertaken by the territory: recovering and enhancing the ancient autochton Brescian vine variety Erbamat. It was mentioned for the first time in 1564 by Agostino Gallo, an Italian agronomist of the sixteenth century, in his book “Le vinti giornate dell’agricoltura et de’ piaceri della villa” in which he defined Erbamat, known at the time as “albamate”.
The creator of this project was the Consortium for the Protection of Franciacorta. It entrusted to Leonardo Valenti, a professor at the State University of Milan and one of the leading experts in Italian grape varieties, the study of evaluating the characteristics of this grape with two purposes: to compensate for the effects of changing climatic conditions on the quality of wines and to enhance a viticulture of the territory where even the heritage of indigenous people plays an important role.
The high acidity and late ripening make this grape interesting in relation to the ongoing climate change which has led, over the last thirty years, to a variation in the time of ripening, an advance of the phenological phases up to 10-15 days and above all a substantial modification of the qualitative characteristics of the grape. Furthermore, introducing an indigenous grape variety allows Franciacorta to combine the “wine-growing”, in which the international varieties of Chardonnay, Pinot Noir and Pinot White are the protagonists, with “viticulture of the territory”, in which the main actor is the local variety integrated with the viticulture of the terroir.
the phenological phases of Erbamat have been monitored since 2012, studying the grapes in order to verify the ripening curves. In addition, pruning tests were set up in order to assess the fertility and the vigor of the bunch. Several studies have been carried out on the vinification of Erbamat and its expression as a sparkling base within Franciacorta wines.
The result was interesting: Erbamat is a relatively late ripening vine, about a month after Chardonnay, with a good acidic content, in particular malic, capable of compensating partially the risk of reducing acidity in basic wines.
Precisely, the acidity in the sparkling wine bases is a fundamental element for giving freshness and longevity and must therefore be preserved as much as possible. This grape variety contributes to the freshness of the bases without distorting their profile, as it is known by the Franciacorta public, thanks to its substantial aromatic neutrality.
Thanks to the grafting of some rows of vines in the five experimental estates, the first production of Erbamat took place in 2011. Castello Bonomi was the only one that vinified these grapes separately and, for this choice, today it is the only company that have a vertical of vintages since 2011. To demonstrate the investment in this project, Castello Bonomi has planted a new vineyard in Erbamat.
A few years after the experiment, based on the effectiveness of the obtained results, today Erbamat is required by the disciplinary of Franciacorta up to a maximum of 10%.

Cuvée 1564
Castello Bonomi, with its Research & Development team consisting of the professor Luigi Valenti and the oenologists Luigi Bersini and Alessandro Perletti, has enhanced the Erbamat by producing Cuvée 1564 available in four vintages.
Cuvée 1564 has a blend of 40% Erbamat, 30% Pinot Noir and 30% Chardonnay, a combination that marries the acidity of Erbamat, the structure of Pinot Noir and the elegance of Chardonnay. The percentage of the present Erbamat varies every year between 30% and 40%, based on the trend of the year.
The wine has a straw bright yellow color with greenish reflections with a parfume characterized by notes of fresh flowers, citrus and tropical fruit. The wine has a strong acidic component typical of the Erbamat grape to the taste, combined with excellent persistence and a marked flavor.
A Cuvée that enhances the quality of this autochthonous vine, mentioned for the first time in 1564 by Agostino Gallo. He defines Erbamat, known at the time as “albamate” as: